The American Tort Reform Association offers resources and partnerships that can help bring greater fairness, predictability and efficiency to America’s civil justice system. Contact us to find out how we may be able to help successfully translate frustration into action and reform.

The Plaintiffs’ Lawyer Quest for the Holy Grail 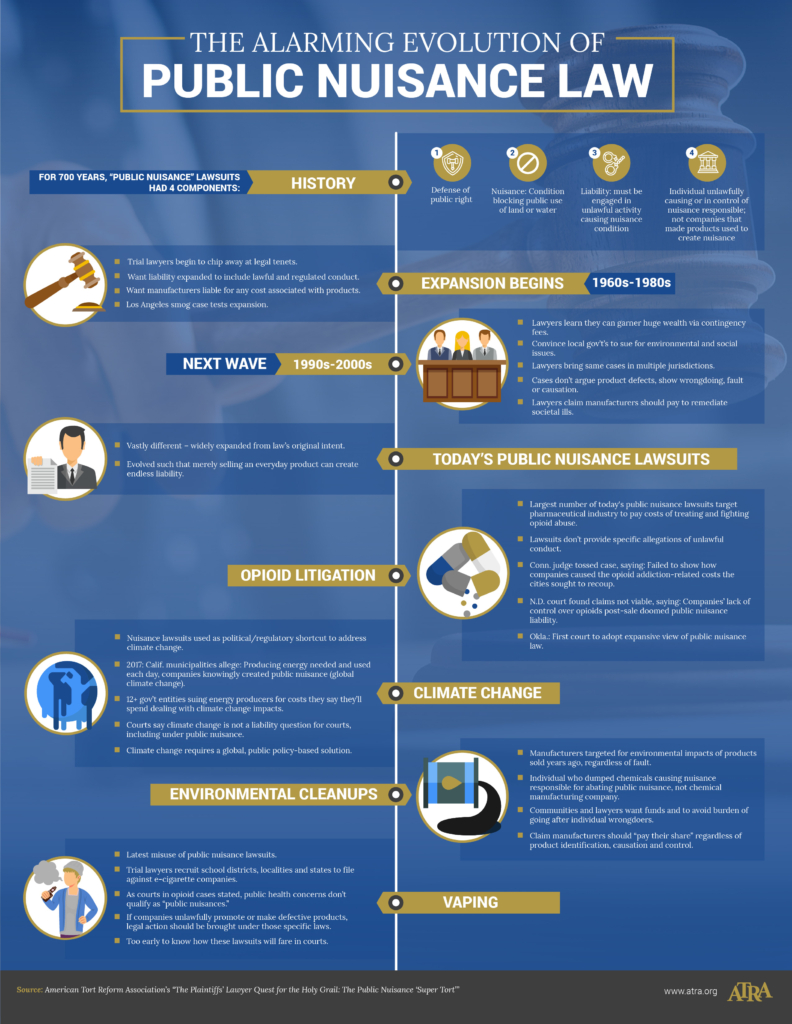 One can only imagine the scene inside the plaintiffs’ lawyers’ R&D laboratory for expansive liability theories when they created today’s public nuisance litigation: “Let’s come up with a way to sue manufacturers without having to prove product liability,” said one personal injury lawyer. “Wouldn’t it be great if this new legal theory did not even require us to prove fault,” added another. “I know, let’s get rid of causation too! And, while we’re at it, let’s figure out how to bring these new lawsuits on behalf of a whole bunch of people without having to deal with those pesky class action rules.”

That is today’s public nuisance litigation in a nutshell. It is completely unprincipled and a far departure from any long-standing liability law. Under tort law, including under public nuisance theory, a person or company is supposed to be subject to liability only for wrongfully causing harm. In today’s public nuisance lawsuits, though, plaintiffs’ lawyers are attempting to convince judges to discard this basic principle. These lawsuits are attempts to subject businesses to liability over societal problems—regardless of fault, how the harm developed or was caused, whether the elements of the tort are met, or even if the liability will actually address the issue. Their mantra is, “Let’s make ‘Big Business’ pay.”

This report explores several high-profile public nuisance lawsuits being waged in courtrooms around the country today. It explains what public nuisance theory is, how it has long been used, and how plaintiffs’ lawyers are trying to re-engineer it into their Super Tort. What we find is that plaintiffs’ lawyers typically look for a crisis that people want to solve. This can be a hot-button political issue like climate change, a widespread social harm like opioid addiction, or an environmental concern such as contamination in a local waterway. Then, they look to represent a local or state government so they can sue on behalf of an entire community without abiding by class action rules. The lawyers offer to do this for “free,” agreeing to be paid only from money the lawsuits generate.

For elected officials, signing up for this litigation is enticing. They get to tell their constituents that they are trying to solve a local, national, or even international problem and it isn’t going to cost them anything. Who doesn’t want free money? Then, the government-deputized contingency-fee lawyers target businesses—often large, faceless, out-of-state companies—that they can vilify in the media and blame for the problem because their products are associated with the crisis. It doesn’t matter whether the companies actually caused the crisis or are legally responsible for it. In fact, they often sue entire industries to cast blame in broad strokes in an effort to get away from having to prove specific allegations against specific companies.

Those who bring today’s novel brand of public nuisance lawsuits gamble that (1) local judges, who often are elected, will want to be seen as trying to solve a problem for the community and will facilitate the recoveries despite traditional tort law, or (2) the targeted businesses will buckle under the pressure of the media and litigation onslaught and settle the claims just to end the nightmare, regardless of the truth or justice.

The truth is that public nuisance theory is not and should not become a “Super Tort” for making businesses pay for any and all crises. As the next section shows, it is a centuries-old tort with a highly specific purpose, namely to deal with local disturbances like vagrancy. It also does not permit either this Cuisinart-style of liability, where everyone in an industry is blended together, or strict liability for manufacturers merely because their products are associated with a downstream harm.

These crises do need to be solved, but they should be solved the right way. That is why today’s expansive public nuisance litigation should concern us all.

Each day, thousands of people in the United States are contracting coronavirus. The virus is devastating families, stretching the ability of health care providers to help those who become sick, and crippling businesses and the economy. Manufacturers have ramped up production of medical supplies and protective equipment and are investigating treatment options and developing vaccines.

Some personal injury lawyers, however, view individuals exposed to COVID-19 as a large new pool of plaintiffs, and health care providers and businesses that aid in the response effort or provide essential services as defendants to cast blame. Personal injury law firms are already recruiting individuals to “sue now” even if they have not contracted the disease. The first lawsuits targeting health care providers, employers, retailers and other businesses for COVID-related injuries have been filed. Many more are to come.

States should proactively adopt legislation that distinguishes legitimate claims from no-injury lawsuits. States can place reasonable constraints on the types of lawsuits that pose an obstacle to the coronavirus response effort, place businesses in jeopardy, and further damage the economy.

ATRA applauds the nation’s governors who have stepped up to address liability concerns stemming from COVID-19. These executive orders generally rely on the governor’s authority under each state’s emergency powers statute to modify or suspend enforcement of state laws that pose an obstacle to the state’s ability to respond to a crisis. The risk is that this type of executive action has not been tested in court. Plaintiffs’ lawyers are certain to challenge the governors’ authority to provide this liability protection through use of emergency powers.

On-Going Developments with Punitive Damages, Due Process, and the Jury’s Role

Please contact us to receive our latest newsletter or to

(Cal., filed January 28, 2020): Arguing that the high court should clarify the circumstances under which depositions of a defendant’s own employees, taken by plaintiffs in a class action, may be introduced into evidence against that defendant by a different plaintiff asserting only individual claims.

(U.S., filed February 27, 2020): Urging the U.S. Supreme Court to review a case involving the relevance requirement of the Federal Rules of Civil Procedure. The lower court prohibited defendants from conducting any relevance review prior to production.